Globally, water resources face threats to the growing population, increase in urbanization, rapid industrialization, and an increase in food production. As a result, this whole scenario displaying a global threat to human health and the ecosystem.

Contrary, the dawn report 2019, investigated that about 9,247 government-run schools in Balochistan don’t have drinking water; 9,838 schools have no toilets, which sows a bleak picture of WASH facilities at the provincial level.

Although a global issue these days, Balochistan is facing a scarcity of water for a long time. The majority of people don’t have access to safe drinking & water for domestic use.

The provincial government has declared a water emergency in most districts. But they are reluctant to admit it that they don’t have a future roadmap for water scarcity. Most of the local tube wells are dysfunctional due to the unavailability of water and funds. More than 2500 government & private tube wells are functional in the city, and similarly, the daily water consumption is 94%. Contrary, the underground water level is going down, an alarming situation for the provincial govt.

There is a dire need for sustainable improvement in the natural resource management (NRM) and WASH (water, sanitation, and hygiene) sectors of Balochistan.

To support and educate communities for knowledge and behavior change about better water consumption and generating economic benefits from natural resources.

BRSP, under its “Integrated Water Resource Management (IWRM)” project, has been working on water conservation & management since 2016 via harnessing people’s potential for uplifting their economic and social services in the local context.

BRSP, under its IWRM project, has reached a total of 39,919 households and constructed 732 Irrigation Schemes including (Spate irrigation, Solar pump, storage pond, irrigational channel, and pipeline) which benefited 34,461 households at targeted districts (Qilli Abdullah & Pishin) of the province. Similarly, 141 Karezes improved for drinking and irrigation purposes, which helped 3500 houses. Moreover, 57 Check Dams constructed in rural districts, benefited 1300 households. Besides, 1,058 homes got Solar Electrification facilities at their localities. On the other hand, around 50,000 plants were planted in different rural areas.

BRSP has been working in the WASH sector for the last two decades and completed various projects during this period. From 2009 to 2014, BRSP implemented a project titled, “Improved access to and demand for quality water, sanitation & hygiene services in Quetta, Pishin and Qilla Saifullah, Balochistan” the Government of the Federal Republic of Germany through KFW Development Bank. This project was completed in three phases. BRSP, under this project, came into partnership with the government of Balochistan titled “government –civil society-community.” In which, government department called PHED (Public Health Engineering Department) and BRSP implemented a community sustainable ownership project by strengthening the allocation of land for source development under different water systems. It constructed 1,240 Small and Large Scale Drinking Water Schemes under various projects, which benefited more than 1 million people (male and female) across Balochistan.

For Behavior Communication Change (BCC), a total of 34167 students & teachers received School Sanitation and Health Education (SSHE) knowledge on healthy and hygienic behaviors and ended open defecation. Similarly, 444 Wash committees and 257 WASH Clubs formed in government schools. On the other hand, 5000 girls school students sensitized Menstruation Hygiene Management (MHM) and provided 60 MHM Kits. Moreover, 24,500 hygiene kits were distributed to government schools of district Quetta. Besides, about 318,512 community members were sensitized on health and hygiene. In general, a total of 321 villages was certified as ODF.

BRSP is also contributing to the government of Balochistan Sanitation Policy via striving & supporting an environmentally friendly open defecation free toilet, solid & liquid waste management, and sustainable sanitation systems that promote healthy and hygienic practices of WASH in the province. Under its GIZ S4M (Sanitation for Million) project, the organization provides access to essential sanitation services, including the promotion & construction of latrine in (household & schools) at the province’s rural and urban communities.

BRSP is also promoting an integrated and total sanitation approach called Pakistan Approach to Total Sanitation (PATS) in communities and schools. Moreover, the organization is also educating communities & stakeholders on sanitation (WASH) to bring behavior change among them.

This includes the construction of decentralizing wastewater treatment & irrigation systems in the province. And overall rehabilitation and improvement of sanitary and hygiene facilities.

The organization recently inaugurated DEWATS (decentralized wastewater treatment system) at BUITMS, Quetta. The project was designed explicitly for wastewater management to reuse it for irrigation & plantation purposes. This is a process of reusing wastewater for irrigation or other drives in Baluchistan.

Though BRSP’s contributions & interventions contribute to the NRM & WASH sectors of the province, the hour’s need is to bring sustainable improvement. Balochistan is going the worst water crisis ever, and the natural resources are also depleting due to overpopulation and climate change. This is the right time that the government takes strenuous efforts with the NGO partnership because if we didn’t implement it today, our province would face severe consequences of climate change shortly.

Also, Read: How Baluchistan is combating with the pandemic 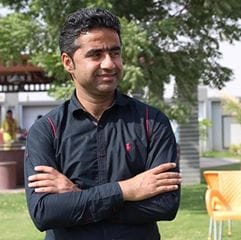 Shams Ullah Durrani is a media scholar and environmentalist. He has five years of working experience in the development sector. He has worked on several projects such as inter-faith harmony, peace is possible, and Green Balochistan Tree Campaign. He is currently working with the Balochistan Rural Support Program (BRSP). His area of interest is Media Research, Climate Change, and Peace & Conflict Journalism.

Fouz Siddiqui is an Academic Writer and Aviation Personnel. He studies Astronomy...